Waterford City Architects invited me to join the museum design team in 2011, when the design process was in its infancy.

My role centred on three key areas: conceiving and developing the sweeping Bath limestone façade, the design and integration of the Waterford Lady sculpture and large architectural scale lettering.

My early involvement in the design process allowed for the sensitive integration of these elements within the design of the building as a whole, and enabled me to draw on my experience working on both medieval and contemporary buildings. 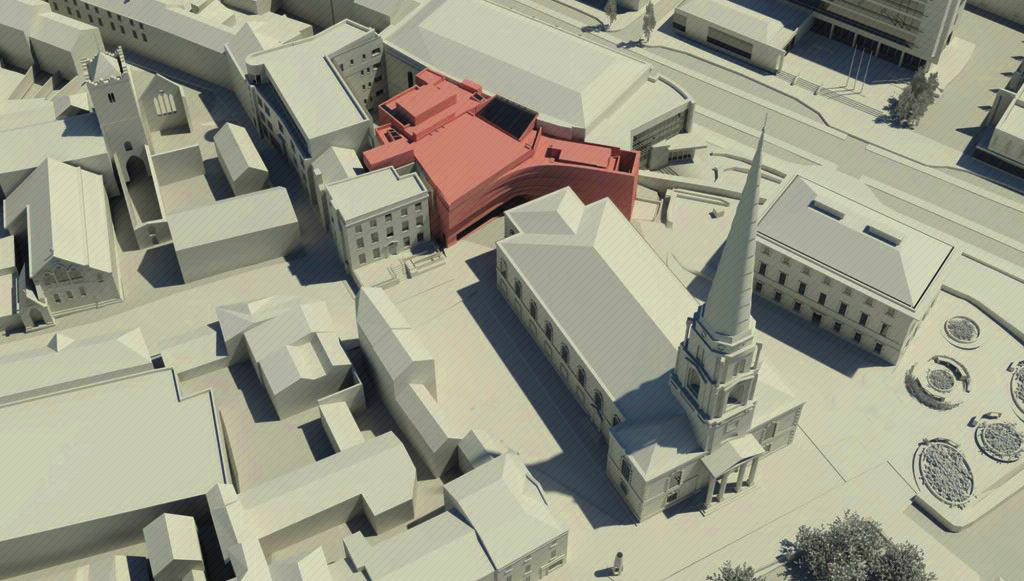 Mindful that the museum is a modern building in a modern city and that it also forms part of an historic hub, articulating this balance was at the forefront of my approach to the design of the façade.

Over the course of preparing the design proposal, my thoughts moved toward an emphasis on form, which would do most of the work in announcing the museum. Inspiration was drawn from the collection of the museum, the medieval period it represents, and stone work within the city. 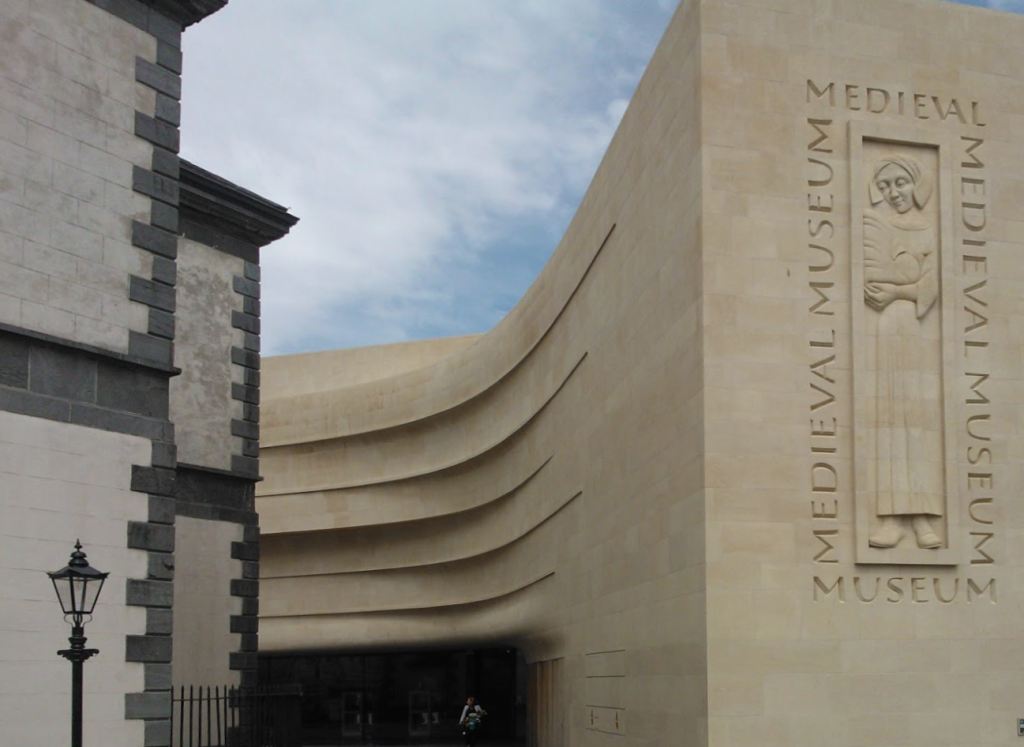 The design of the façade was informed by the principal of discovery. Navigating the parameters set out by pre-existing buildings in proximity to the site, and squeezed by the Cathedral, the complexity of the site dictated that on approach, the building reveals itself slowly, in stages.

The curvilinear sweep of the building’s Bath limestone façade, bookended by the lettering on one side, the Waterford Lady on the other, allows the museum to gently assert itself amid its neighbours 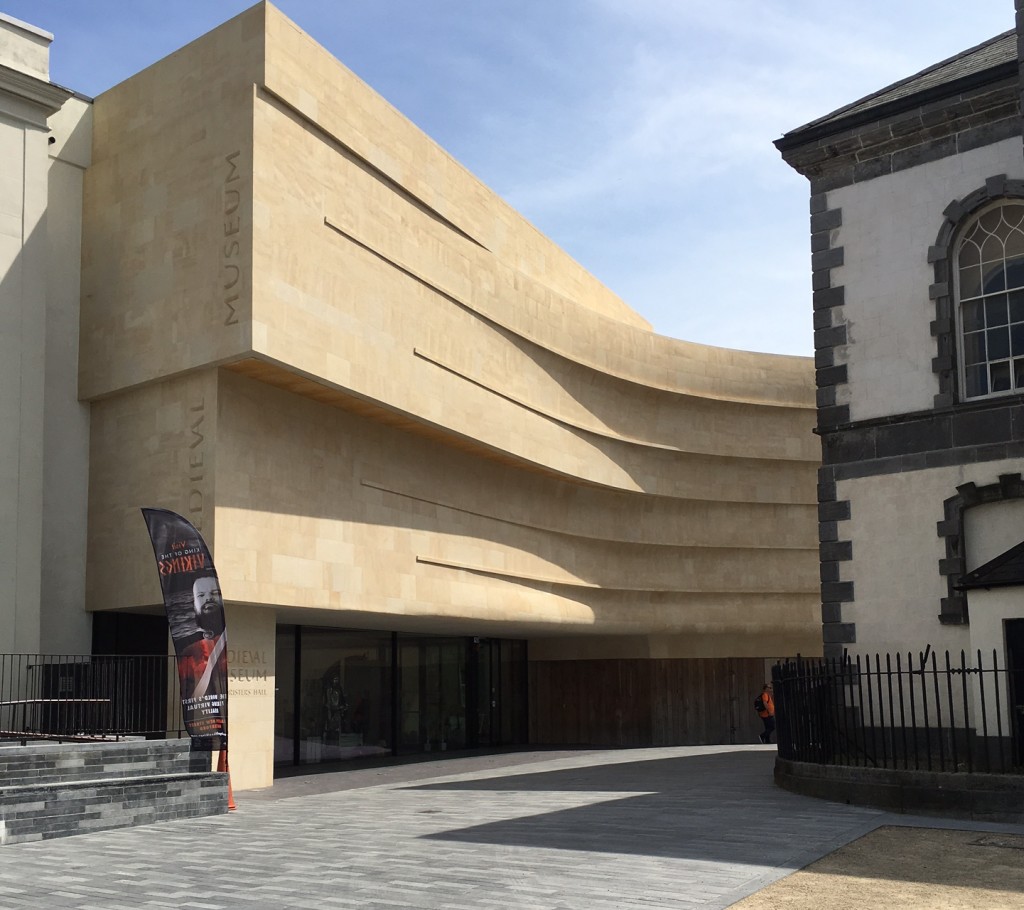 The City Council architects had made an early decision to present the front of the museum and rear of the Theatre Royal as one façade. This significant decision afforded the opportunity to create a coherent space that would join the two squares on either side.

The design challenge was how to sculpturally resolve the conjoining of these two rigid blocks whilst also addressing the windowless expanse of the exterior. The response to this challenge is articulated in the continuity of the façade’s curvilinearity. There are no rigid intersections. Rather, there is fluid plasticity of form that stretches between the two anchor points from one square to the other.

Punctuating the windowless facade into a series of horizontal courses, and pitching the weighting correctly to balance the mass of the building, facilitates this plasticity.

The façade at its most distilled is a set of architectural mouldings — imagine a heavily moulded gothic arch and turning it on its side.

These mouldings develop from a flat plane into the curved section before reverting to the plane once more. This creates changing shadow as they turn away from the light and back again. 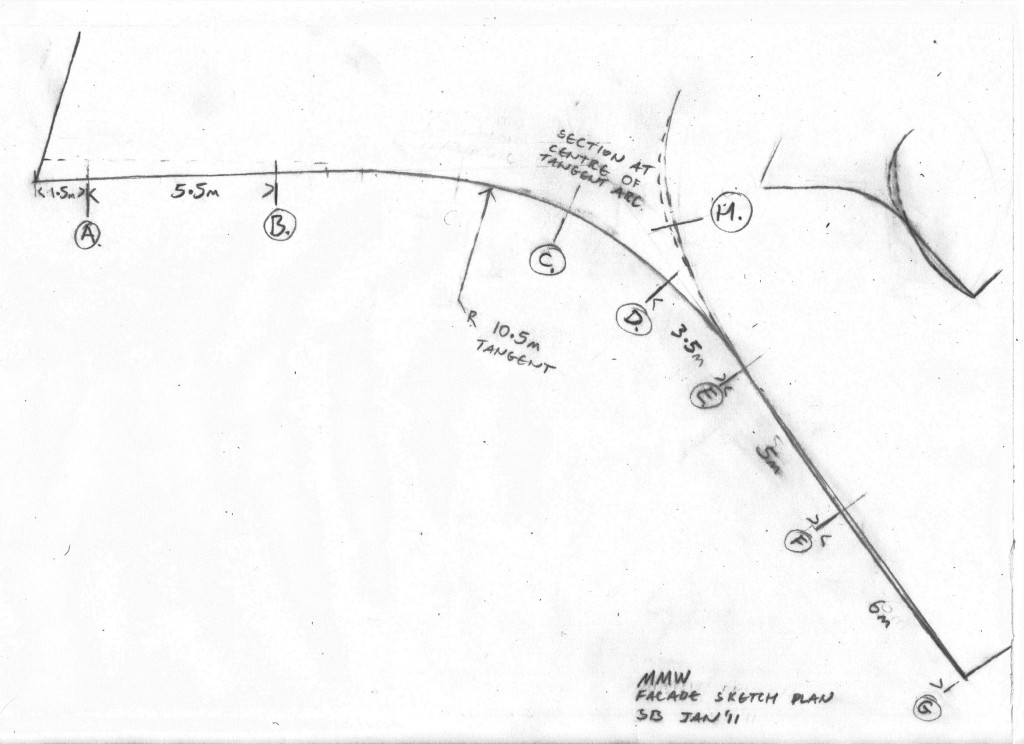 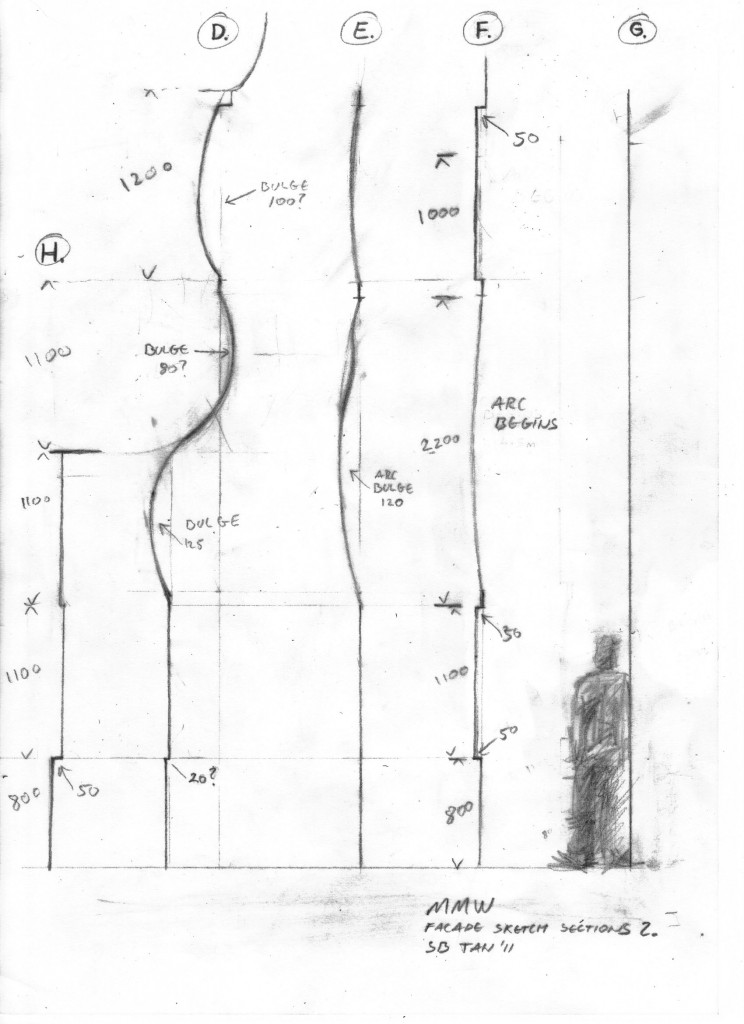 A dynamic stretch is created across the façade as each moulding is off-set to the other. In order for these dynamic plastic elements to perform in an architectonic manner, they are underpinned by the structure of the horizontal coursing.

Without the underlying structure, these elements would be singularly sculptural and structurally unravel.

I chose to work with clay from the outset, right through to the advanced stages of the design process.

The clay model was the leading design tool, its malleability offering total control. Using it as a sketching tool meant the design could evolve quickly and intuitively.

Each iteration of the model saw it grow in size, with the larger scale models accommodating greater detail. This allowed myriad concerns to be addressed, controlling the development from the general to the particular. 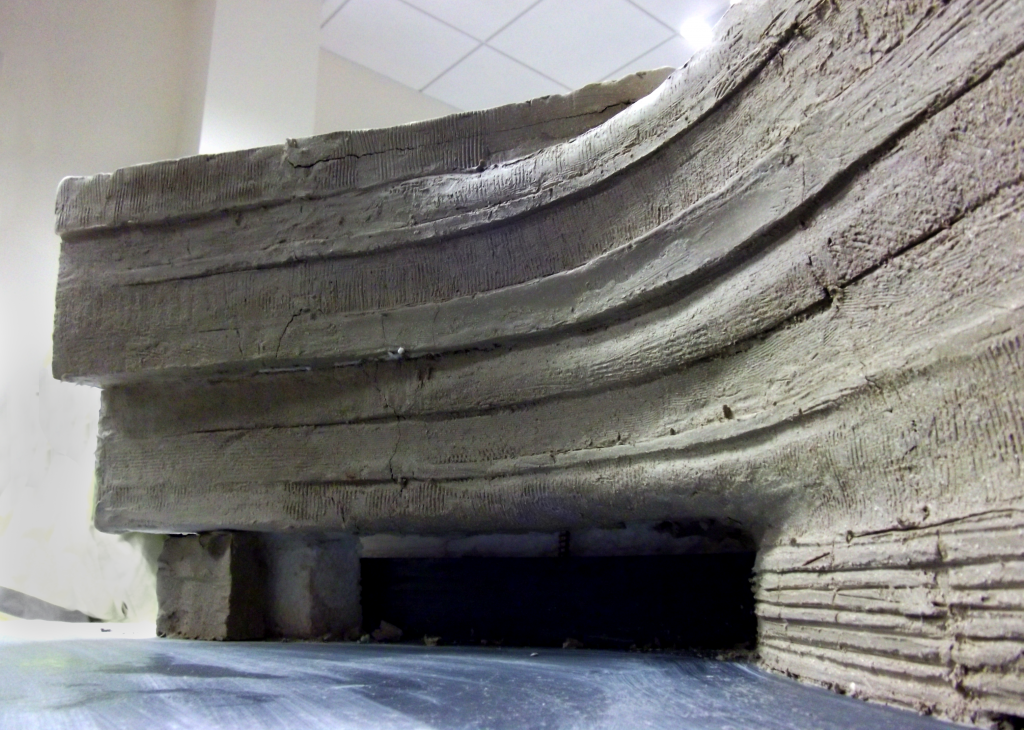 Using clay in a rigorous way, it proved a sophisticated design tool. 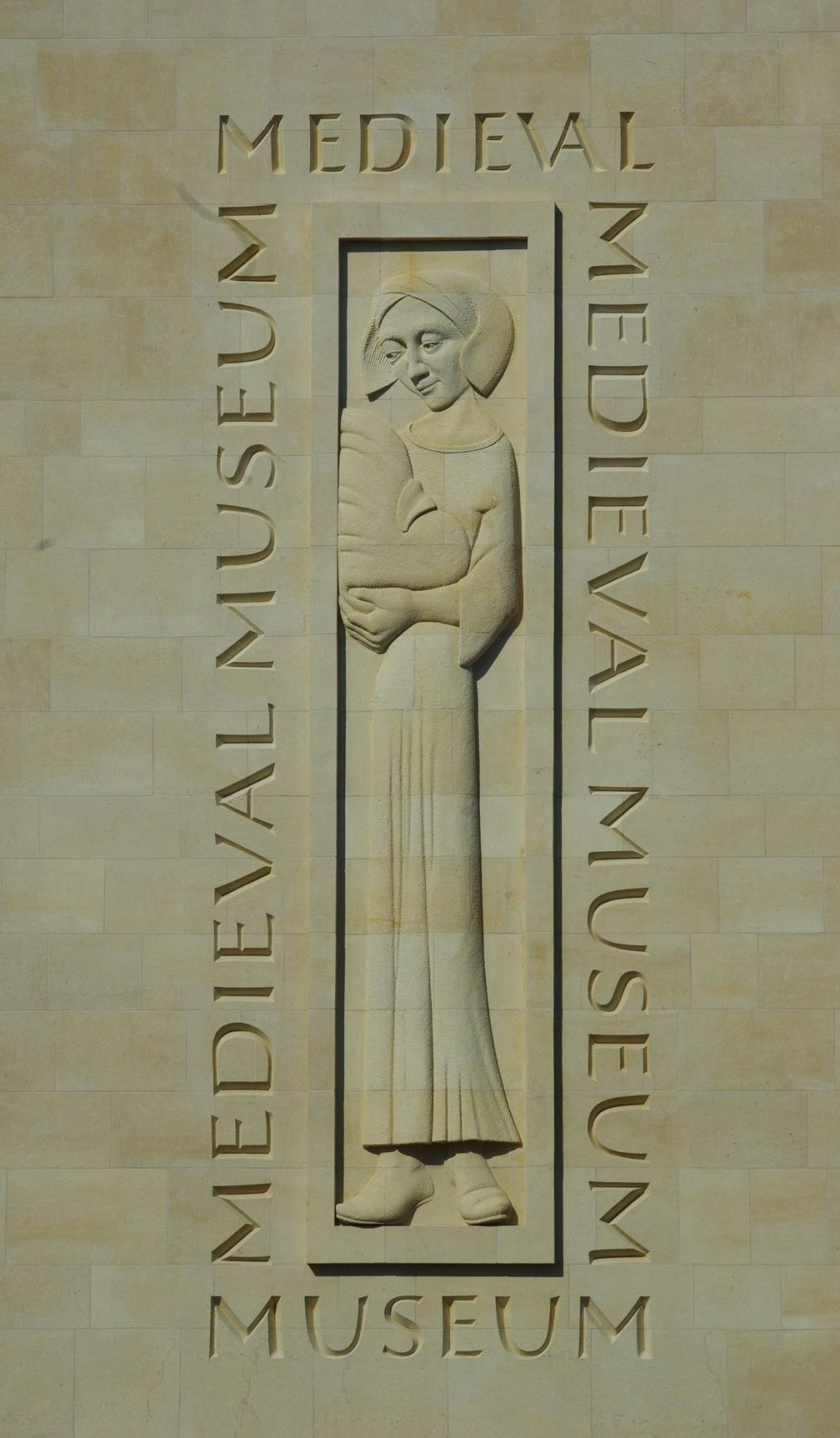 The Waterford Lady is a relief stone carving inspired by a medieval metal belt piece. Scaling the belt motif upward in the region of 100 times to 7m ensured that the Waterford Lady would read well in stone.

Integrating the carving with the block work, rather than having it sit on the building as a veneer or addition, ensures the sculpture is integral to the fabric of the Museum.

The letters framing the Waterford Lady act as anchor to both the façade and the sculpture. 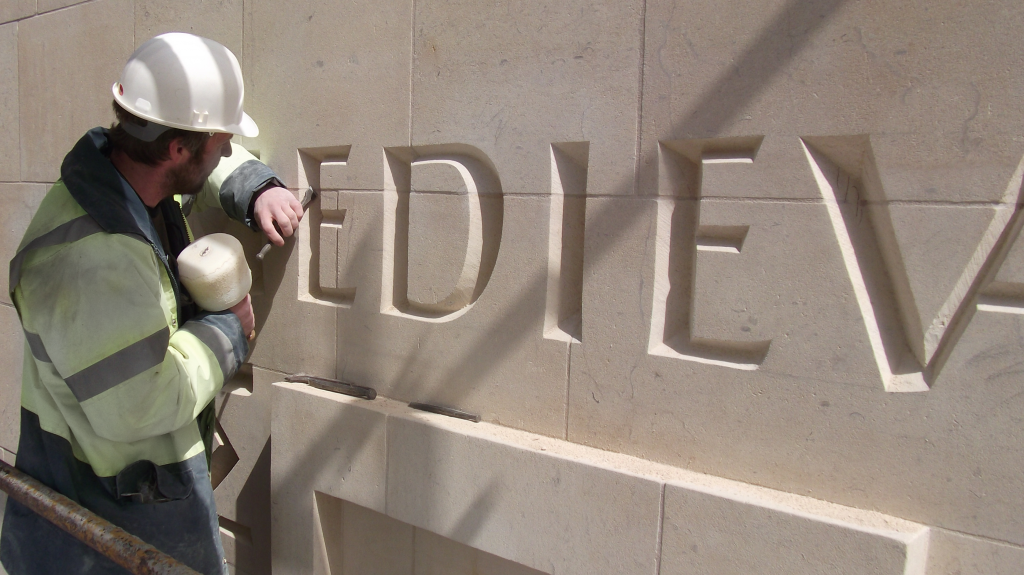 Even on a bleak day, the scale and depth of the museum’s v-cut lettering generates enough shadow to always read. Yet the lettering serves a purpose beyond signage.

Taking a cue from lettering of the medieval period, the intensity of each letter form sees every character celebrated as a thing in and of itself. Providing decorative pattern, it is a strong architectural feature of the museum and serves the building’s overall form.